I ask the assembled developers, has Wikipedia's success made it hard to see your own contribution? At the Wikimedia Developer Conference I suggest the project developers suffer from their own success and extremely high aspirations. post

I announced that I had only one slide with six topics but warned that the slide had 40 builds. This was a new style for me. After my 40 minute presentation I fielded questions for 30 minutes while prompting the audience with six key images recalled from the builds. slides

I reformulated my friendly interpretation of technical debt emphasising strategy rather than condition. The strategy encourages fueling progress with acceptable debt so long as it is built on a foundation of technique and informed decision making. 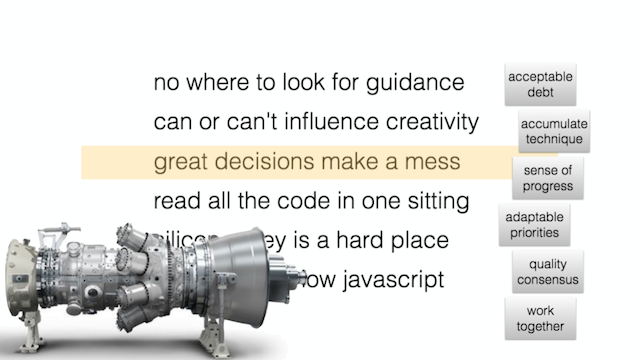 The strategy depends on doing a lot of other things well. I represent these as a growing stack of blocks.

When we work together, sharing problem solving, we can find consensus for a broad sense of quality. This awareness enables adapting to evolving circumstances while maintaining and hopefully communicating a sense of progress. When progress wanes one discovers new techniques for preserving great decisions while managing their real world consequences.